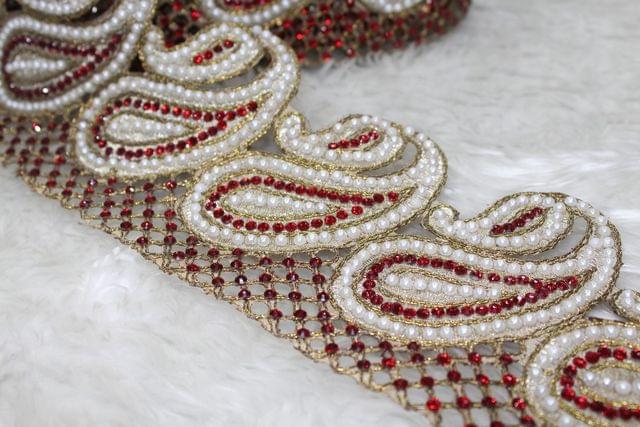 As the rays decorate the sun, As the flowers adorn the stem… As the smile enhances your face, As the stars polish the night sky… Borders, the dreamy edging companions have always given us perfection and style with a beautifully finished rim to our design ideas. Nothing can be as complimentary as a well enclosed piece of attire bathing in the grace of a neat and chic presentation. Garbs and things as such can be always graceful when carried in a dignified way, but adding this bit of trim to it (with the edges given distinct care), their whole aura is lifted and placed in a different elevation. Be it from the simplest of the fancy margin buddies to the grandest of the celebratory item, these have their own special magical power to command attention of the crowd whenever they are given that right of importance.

There is a natural feeling of attractiveness of these edging companions that even our primeval forefathers had their evolving intelligences enticed by it. To start with the evolution of the border stylers, our ancestors had their own way of highlighting their wear (and to be established socially supreme in their collective cluster where they belonged to). Being in that prehistoric set up was a 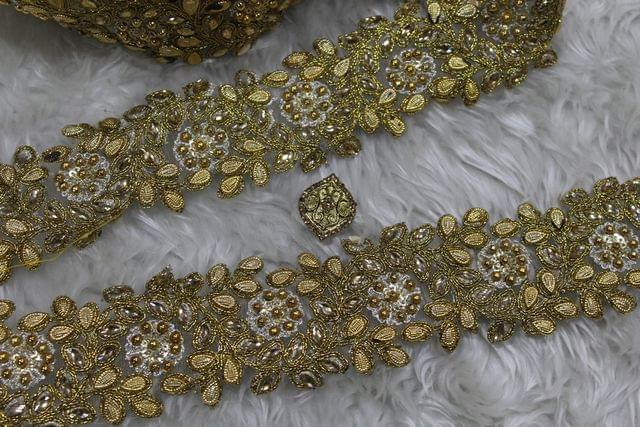 struggle to continue and the acknowledgment of being noticed was a key factor of being in rheostat those days. From adding face decorations with tints of natural dyes and making bits and bobs together to form hair adornments led way to more prettification advances. As man began to dress themselves it paved way for more design developments, gradually trim introduction came into being with all these. Let’s take for example a situation when the first instances our forefathers had their body covering. As the first outfits were made apparently with leaves, barks of trees or animal skins the simplicity might have been plain to their eyes. So, then comes the decorations in form of the first primitive usage of trims and trinkets. Man started to decorate the edges and lines of their garbs with contrast materials interlacing and interwoven to form a frame style of embellishments. So let’s assume that these were the first practice of doing Borders. To have a literal understanding, citing a reference from the Oxford dictionaries for a more common usage, a border is ‘a strip that goes around or along the edge of something, often as decoration (proper noun)’. E.g. the dress was white with a delicate lace border’ (https://dictionary.cambridge.org/dictionary/english/border).

Having stated all that, the Borders as our trims have been going through a lot of progresses and re-developments so that with each generation coming into the picture, their uses and acceptability gets more prime focus. Their uses were influences mainly by the social structure their wearer belonged to (whether it be the artisans to the nobility of Paris and the rest of the Europe; the working class to the aristocracy of the Americas; the laymen to the Rajas of the Indian subcontinent and as such throughout the whole of the globe, framing the attire stays as a medium of festivities and finesse to all). The less privileged had them made from basic cotton and other handy materials, yet prepared them as beautified as they could have been made. There was a simplicity to it yet an element of celebrations in this one. The richer mass had them in all sorts and makes. From the Cotton borders, to the Silk borders and the Rich gilded flashy Borders, they had all sorts of 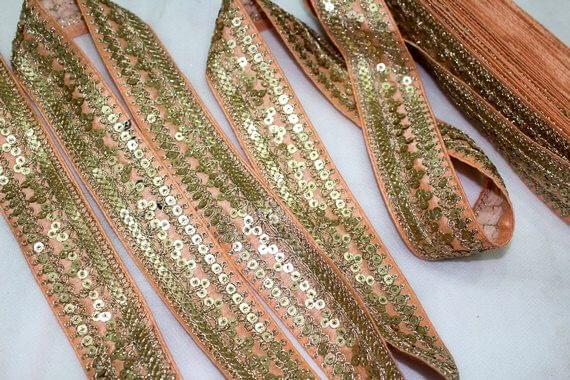 weaves and ornamentation done to show off their exquisiteness to the onlooker. Mentioning that, it is interesting to note that (all around the globe) the borders have a pair of subsections too (all with their beautiful individuality in the Fashion Trims universe, but with an elegant bond of similarity and uses to share among them). The Lace Borders and the Ribbon Borders are a textbook balance, but at the same time they set seamlessly as a distinct edging element with the same spotlight character. They too are a boundless substitute to the edge trimming and a striking auxiliary to the hero in this article- The Borders. Nevertheless they diverge with their perceptions; they are in a mutual intention at the finish–to enhance the pieces they are positioned with, to spice and awake the impression and to classily generate a complete elaborate and fine acknowledged air.

Coming to the verities and the assorted choices the Borders have, Ornamentation, embroidery and embellishments come in a rich view here. From English motifs, to Oriental thread works, to exotic weaves, to rich adornments and even made in form of 3-D printed wonders - the art of elegance in the borders and its counterparts is unlying fashion-chicness. From the simplest of the Plain weave border, to the grandest of the Zardosi and kundan framed royal border, a casual occasion gets as much as a bridal wear gets to enjoy the bond of a design and its frame. A lot of verity is there out and the Zardosi, Zari, thread work and sequins forms are in rave demand nationally and internationally, even though the other styles have as much as a strong and loyal customer base. To have a broader perspective of how the borders can be used in an artistic mode and in a range of forms it’s just easy as to have a spec of an imaginative judgment and a consideration of trend drifts. Let’s take for example, the Kundan stone borders on a nice rich semi-sheer net party saree or the Zardosi borders on the frame of a vibrant royal custom-made dupatta; the Stone and Mirror work Sari/Saree borders on the neck and hemline of a Mughal inspired Anarkali floor length gown or the Cut-work floral border on the chocker neck and bottom hem of a racer back sheath midi dress; creating an Indo-Western blend with the Zari borders on a silk mix peplum maxi-skirt or making a fusion statement with the Stone work borders on the boat neck and lower hem of a fancy crop-top; having the exclusivity of the Beads embellished borders, Mirror work borders and the Rhinestone borders on the bridal saree/Lehanga set or the fantasy of the Hand worked borders/ Temple art borders played on a Karachi kurtha and its crush-silk maxi kilt for the wedding night reception for the newlywed; the Artsy borders made to rim your superior home décor or the Tribal look borders made to edge your exceptional bed-spread set; making the Geometric design borders into the shoulder straps of a custom-designed satchel style back bag or wrapping the Embellished borders as the ribbon substitute around the exclusive gift you have for somebody special… nobody says that a specific piece of item has a singular use, but the added varied styles you have for them, the more they get their exclusivity to shine onto yourself.

Speaking of the product line now with the main focus on the borders, we here at LaceCraft has an eclectic and fantastic array of Fashion Borders to claim your trend spirit. These items have been 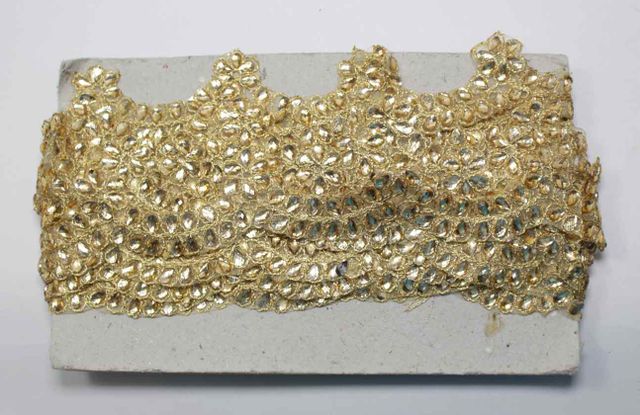 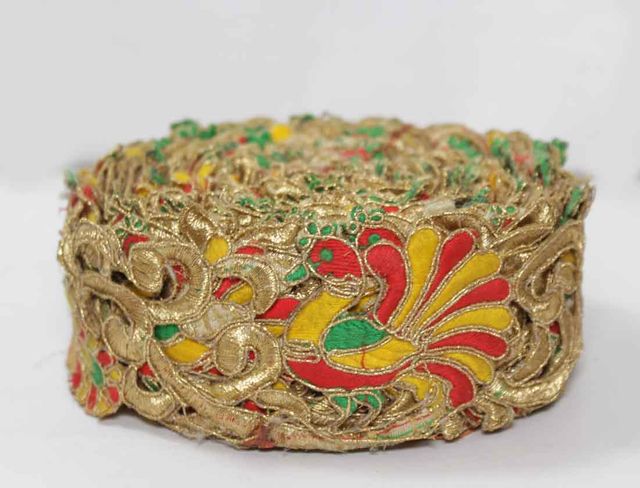 and fancy festal style trendy ribbon border or the Stylish twisted angular basket weave look simple yet rich feel great accompany piece graceful and nice smart trim piping lace border; the Convivial and stylish trendy-chic festive and rich upscale feel calm and celebrations look lavish style bridal party border or the Majestic floral simple form angular waves diamond formation opulent and imperial feel trendy sequins and thread worked net base lavish floral border… with us, there will be something for everyone and everything for the ones who search uniqueness with a multifarious selection of traditionalism and modernity.

To say that LaceCraft Borders are elegant and sophisticated even in the face of simplicity is not a passing statement. All the testimonies and deepest acknowledgment shows that gratification when people give their shout out that – yes, they are the ‘Graceful Edges, Stylised Visions: It’s the Borders’…

NB: Products (Borders) specific to this article mentioned in the pics and write-up, can be sourced from https://www.lacecraft.in/browse/saree-border

The Fun and Elegance in the Majestic Appliques of Embellishments: Patches!!!

Creating a dream, Sewing it with glee- Fabrics, our greatest creative buddy!!!

Laces: Then, Now and How… Splendor in the finer rims...

The splendor in Framing it Right… with the Borders

Laces- Are The beauty in The Edging Companion, The Exquisite Feel of the Border Stylers

Fabrics- The mould of fashion stories